The Decay of Fiction

Presented in conjunction with the series Film After Film


The moving-image works in Film After Film show how film has been changed by digital technology, and how it lives beyond the walls of the movie theater, by inhabiting our mobile devices, computers, and gallery walls.

Phil Solomon’s immersive triptych film installation American Falls (2000–2012, 55 mins.), which was originally commissioned by the Corcoran Gallery of Art in Washington D.C., transforms the Museum’s 4,000-sq. ft. third floor gallery into a panoramic and artistic journey through the catacylsms of American history, and an elegy to the film medium that welcomes a new era of mixed medias. Combining chemically degraded film images with computer editing precision, Solomon’s piece recasts the Niagara Falls as both a metaphoric landscape and audiovisual backdrop to American history, all accompanied by an intricate soundtrack of historical addresss, popular music, and sound effects (designed and mixed in 5.1 surround by Wrick Wolff). (On view through November 25, 2012)

Pat O’Neill’s The Decay of Fiction (2002, 73 mins.), a film set in the abandoned Ambassador Hotel, an old-time movie-star hangout, is presented in the Bartos Screening Room on a continuous loop. In his director statement, Pat O’Neill describes the film as “an intersection of fact and hallucination in an abandoned luxury hotel.”  Please note: The Decay of Fiction will end on October 26.

Immemory, a multilayered multimedia CD-ROM by the late French filmmaker/philosopher Chris Marker is presented on a desktop computer in the Bartos gallery area. In the linear notes of the original CD-ROM, Chris Marker writes “the object of this disc would be to present the ‘guided tour’ of a memory, while at the same time offering the visitor a chance for haphazard navigation.”

Joe Swanberg’s LOL (2006, 81 mins.), a Mumblecore film about romance in the social network era, with love stories playing out on laptops, cell phones, and online chat rooms, is shown on an iPad in the Bartos gallery area. J. Hoberman, in his recent book Film After Film (2012), comments on how “LOL maps a system based on cell phones, instant messaging, websites, and YouTube, to suggest a virtual world more compelling than the real one.” 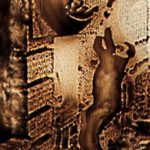