Dir. Orson Welles. 1979–1985, 30 mins. The director and actor Orson Welles, who was also an accomplished magician, worked to develop a television series in which he performed magic. This fascinating and fragmentary work is a compilation of material from the project, combining some of Welles’s best magic tricks and elements of autobiography and history. The footage was restored by the Munich Film museum.

Dir. Adam Wong. 2007, 88 mins. With Anjo Leung, Tsui Tin Yau. Magic comes to the streets of Hong Kong in this youth romance about a love triangle between two amateur magicians and a salesgirl. Young star Anjo Leung, a real-life apprentice of Hong Kong magic guru Harry Wong, handles the film’s many illusions with showmanship and panache. 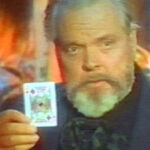