With Dirk Bogarde, John Gielgud, Ellen Burstyn, David Warner. Resnais’s first film in English is an autumnal, acid-sharp psychological portrait set largely inside the mind of a dying novelist, in a career-crowning performance by John Gielgud. A family drama that moves between dream and reality, the film has been cited as an influence on David Lynch’s Mulholland Drive. 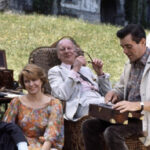