Followed by book signing of Luck and Circumstance: A Coming of Age in Hollywood, New York, and Points Beyond in the Moving Image Store.

Dir. Michael Lindsay-Hogg, 1968, 63 mins. With the Rolling Stones, The Who, Yoko Ono, John Lennon, Jethro Tull, Marianne Faithfull, Taj Mahal. A rarely screened rock ‘n’ roll time capsule from swinging London in the 1960s, The Rolling Stones Rock and Roll Circus (ABKCO Films) is a priceless record of a concert that was held on a circus stage, featuring some of the greatest performers of the era. It is one of the many great achievements of the versatile and prolific director Michael Lindsay-Hogg (The Beatles’ Let it Be, Brideshead Revisited, The Normal Heart, and much more). Lindsay-Hogg will be present for a post-screening discussion and book signing of his captivating new memoir Luck and Circumstance: A Coming of Age in Hollywood, New York, and Points Beyond (published by Alfred A. Knopf). Lindsay-Hogg takes us through an extraordinary life including boyhood encounters with Marion Davies, William Randolph Hearst, Olivia De Havilland, Humphrey Bogart, Henry Miller, and a prolific career in the worlds of film, television, and music. 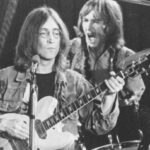