Puppet Pioneers: Foodini the Great and Friends on Early Television

In the years immediately following World War II, the number of televisions in U.S. homes increased exponentially, from the tens of thousands to the millions. The broadcast industry was in its infancy, and networks rushed to keep up with the growing demand for programming. The fledgling CBS television network added an array of shows to its roster in 1948, among them Arthur Godfrey’s Talent Scouts, Ed Sullivan’s Toast of the Town, and the CBS-TV News. Looking for a children’s program to compete with the recent success of NBC’s Kukla, Fran and Ollie and Howdy Doody, CBS debuted The Adventures of Lucky Pup, a live, 15-minute program created and performed by veteran puppeteers Hope and Morey Bunin. Featuring magician Foodini the Great, his obedient sidekick Pinhead, and human host Doris Brown, Lucky Pup quickly became a sensation. The show was lauded by critics and popular among children and adults alike, making the Bunin puppet characters among television’s first big stars.

Museum of the Moving Image has a collection of more than 2,000 artifacts related to the work of the Bunins, including a comprehensive set of material illuminating the production, promotion,  and fan response to Lucky Pup (1948-1951) and its nearly identical successor on ABC, Foodini the Great (1951). Artifacts in this collection allow for an in-depth exploration of the making of one of television’s first hit shows. Material includes original hand puppets, annotated scripts, props and costumes, promotional material, a rich assortment of licensed merchandise, and fan letters and drawings that reflect the dramatic impact of television on audiences as it emerged as a significant form of mass entertainment.

The Jim Henson Exhibition at MoMI is a dynamic experience that explores Henson’s groundbreaking work for film and television and his transformative impact on culture.

Morey Bunin and his brother Lou (who would become known for his acclaimed stop motion animation version of Alice in Wonderland) worked with pioneering puppeteers Tony Sarg and Bil Baird in the early 1930s, operating elaborate marionettes in the window of Macy’s department store. Morey soon teamed up with puppeteer and artist Hope Shippee, and, as a married couple, they created a company of hand puppet characters, performing them in the 1930s and ’40s as part of the WPA Children’s Art Project, for the USO during World War II in the South Pacific, and in theaters as live entertainment programmed alongside a “feature” film. 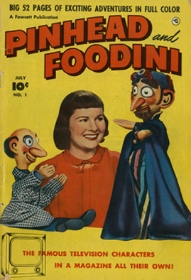 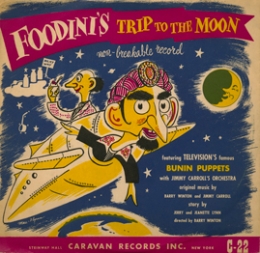 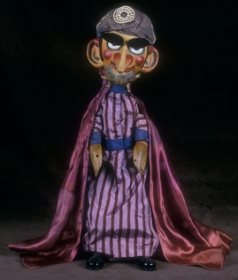 In August 1944, the Bunins performed their puppets on three half-hour fashion shows on DuMont’s New York City television station WABD, sponsored by Alden’s Chicago Mail Order Company. The following year, they performed regularly on Teletruth, a youth-market version of the wildly popular television quiz show format. The increasing popularity of the Bunin puppets brought them to the attention of executives at CBS who, after catching their performance at Radio City Music Hall, invited the Bunins to adapt their live show for television.

The network particularly liked a routine that featured Foodini the Great, a magician who fruitlessly devised schemes to swindle a dog—Lucky Pup—out of five million dollars inherited from a circus queen. This premise formed the basis of The Adventures of Lucky Pup, which aired live weekdays on CBS’s growing network of affiliated stations, and as a half-hour “review” on Saturdays, using kinescoped segments from that week’s live shows.

Foodini (performed by Morey) and Pinhead (performed by Hope) were the show’s main characters; Lucky Pup appeared only infrequently after the series’ first few months. Other characters included Foodini’s arch rival Phineas T. Pitch and Adlai Bundleby, a mailman. Befitting their stage show origins, the Bunin puppets had rigid, brightly colored, expressive faces (Foodini had eyebrows that wagged up and down) and distinctive costumes, designed to communicate their characteristics from a distance.

Foodini’s characterization reflects an “orientalist” paradigm that associates mysticism and magic with Eastern cultures and traditions. From Jafar in Disney’s Aladdin to Johnny Carson’s “Carnac the Magnificent,” depictions of turban-wearing magicians appear regularly in popular culture, promoting negative stereotypes of Hindu, Muslim, and Sikh people as exotic and endowed with extra- (or non-) human attributes. Foodini’s incessant cruelty to Pinhead is another manifestation of how people glossed as “Arab” have been characterized in negative terms. These tropes have become widely recognized as deeply problematic. Studying the history of such depictions in film and television sheds light on how these stereotypes circulated and took hold in dominant public culture narratives, which contribute to real-world acts of discrimination and racism.

Episodes of Lucky Pup typically portrayed Foodini’s bumbling schemes to get rich and powerful through magic or trickery, using elaborate, inevitably ineffective inventions, always with the loyal assistance of Pinhead. While it successfully appealed to young viewers, the show’s dark humor attracted adult fans as well. One such fan was playwright William Saroyan, who, in a letter to CBS extolling the series, described Foodini as “the attractive fake all authority is: confident, loud, rude, self-centered, proud, and yet a delight to behold in action because his pose is easy to see through, and because his own fantasy of power is forever tripping him into the ludicrous helplessness into which all authority soon finds itself.” This lampooning of a power figure was, perhaps, more palatable for audiences because Foodini had non-Western characteristics.

Unlike those of its rivals on NBC—Howdy Doody and Kukla, Fran and Ollie—the narratives presented in Lucky Pup dispensed with a proscenium and were set in a human-free world of puppets. Such an approach pre-dated by eight years the work of Jim and Jane Henson, another married puppeteer duo, who similarly made use of the boundaries of the television screen to create a naturalistic space for puppet performance. 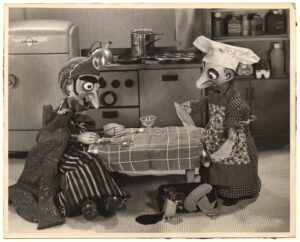 Promotional images for The Adventures of Lucky Pup, c. 1948

The Bunins produced the show, edited the scripts, and devised elaborate props for each episode.

The show’s genial human host, Doris Brown, and a puppet clown named Jolo introduced each episode, promoted sponsors' products, read viewers’ letters on the air, announced the availability of ancillary materials (such as photographs of the puppets that cost 15 cents each), and advertised public appearances.

The primary commercial sponsors of Lucky Pup were Bristol-Myers’ Ipana toothpaste and Sundial Shoes. In the early days of television, product advertisements were integrated into the shows rather than promoted during commercial breaks. When Ipana toothpaste became a sponsor of Lucky Pup in March 1949, the Bunins added a toothy puppet character named Smiley to interact with Doris Brown and Jolo the Clown during opening and closing segments. 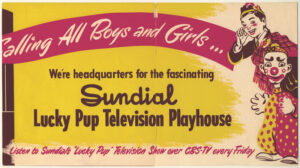 Promotion for Sundial’s sponsorship of The Adventures of Lucky Pup, c. 1951

Lucky Pup was propelled by television’s meteoric rise in the post-WWII era. With coaxial cable lines linking New York to Chicago in 1948, and New York to California in 1950, live broadcasts of Lucky Pup could reach viewers coast to coast.

The primary commercial sponsors of Lucky Pup were Bristol-Myers’ Ipana toothpaste and Sundial Shoes. In the early days of television, product advertisements were integrated into the shows rather than promoted during commercial breaks. When Ipana toothpaste became a sponsor of Lucky Pup in March 1949, the Bunins added a toothy puppet character named Smiley to interact with Doris Brown and Jolo the Clown during opening and closing segments.

CBS regularly used marketing gimmicks to keep Lucky Pup viewers engaged. One such effort was a contest inviting children to submit a drawing inspired by the program, which elicited more than 14,000 entries. A striking number of the drawings that the Bunins saved for their archive depict families clustered around a television set in a living room, reflecting not only enthusiasm for the characters but also the novelty and communal joy of watching television. Also notable is the real or idealized nuclear family life represented in the drawings.

Some worried whether Lucky Pup—with its “evil” protagonist, Foodini —was appropriate for young viewers. In his January 30, 1949 column in the New York Times on the need for standards in television programming, television critic Jack Gould censured Lucky Pup for Foodini’s “plotting,” “trickiness,” and excessive violence toward Pinhead, declaring that the show “comes perilously close to becoming a ‘horror’ item.” The same article claims that “there is no way whatsoever for the public to know in advance what kind of entertainment he is going to see. It must rely solely on the good sense of the television industry and those who work in it.” This, in fact, was untrue in the case of CBS’s presentation of Lucky Pup: before airing at a family-friendly 6:30pm, the show was “previewed” for adult audiences for two weeks at 8:30, presumably past most children’s bedtime.

By 1949, images of television stars began to grace all kinds of merchandise, in much the same way as film stars had since the 1910s. While the licensing juggernauts Howdy Doody and Hopalong Cassidy led the way, there was a wide variety of objects available in stores and via mail order that featured characters from Lucky Pup, most often Foodini, Pinhead, and Jolo the Clown, including greeting cards, records, toy puppets, clothing, comic books, jewelry, puzzles, and children’s furniture.

By June 1951, Ipana executives were dissatisfied with CBS’s promotion of Lucky Pup and brought their business—and the show—to ABC. The title was changed to Foodini the Great, and it ran as a weekly, half-hour series on Saturday mornings at 11am. Host Doris Brown retired when she was about to get married (a development she announced on the final Lucky Pup episode on CBS), and was replaced by Ellen Parker and, a few months later, Lou Prentiss. While Saturday morning would soon become prime-time for children’s programming, in 1951 it attracted less overall viewers than the weekday evening hours. The time slot switch and the  change in format from a 15-minute to a half-hour show are among the reasons for the show’s cancellation after a mere six months on ABC.

After two years of reruns, Foodini the Great disappeared from the airwaves. Despite their enormous popularity in the late 1940s and early 1950s, Foodini, Pinhead, and friends have been largely forgotten, residing mostly in the nostalgic corners of the internet, where there is still some traffic in Foodini merchandise. MoMI’s comprehensive collection is a powerful reminder of the status of the Bunin puppets as early TV stars, and how much they meant to the emerging medium’s earliest fans. It also points to the ease and eagerness with which American audiences embraced a comic, fictional character who embodied pernicious, stereotyped ideas about “Eastern” people and culture.