In 1991, the renowned special effects makeup artist Dick Smith donated a unique collection of artifacts related to his work to Museum of the Moving Image. Smith transformed the art of special effects makeup, introducing techniques that set the standard for the field. Among his innovations was replacing the use of one-piece face masks in favor of applying foam latex prosthetics in small sections, a method that allows actors a greater range of facial expressions.

Though widely known for creating realistic aging makeup, Smith also pioneered the combining of special effects makeup with other mechanical effects, such as the spinning head of the possessed Regan MacNeil character in The Exorcist (1973). Smith was a generous mentor to several generations of aspiring makeup artists, some of whom became leaders in the field themselves, such as Rick Baker, Greg Cannom, and Ve Neill. The Museum’s collection includes molds, prosthetics, and other devices created by Smith for such films as The Exorcist (1973), The Hunger (1983), Taxi Driver (1976), Altered States (1980), Little Big Man (1970), The Godfather (1972), Amadeus (1984), and Starman (1984). Many examples of Dick Smith’s work can be seen in the Museum’s core exhibition, Behind the Screen. 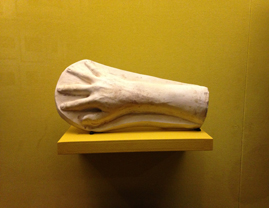 Behind-the-scenes photograph from The Exorcist. Gift of Dick Smith.

Production Design - The Museum’s collection of more than 130,000 objects includes a broad range of production design material from many significant films and television programs.