Tut’s Fever Movie Palace is artists Red Grooms and Lysiane Luong’s interpretation of the exotic picture palaces of the 1920s, which was commissioned by the Museum in 1987. Bursting with color, messages, symbols, and gags, Tut’s Fever is also a working movie theater, permanently installed in the Museum’s core exhibition, Behind the Screen, and features daily screenings of such classic vintage movie serials as Buck Rogers and Flash Gordon. Every surface in the 30-seat theater—and adjacent lobby—is hand painted, including slipcovers on each of the chairs, which are adorned with a rendering of Rita Hayworth, and the screen, which features an image of Mickey Mouse. The theater includes sculptures of movie star icons as theater personnel: Theda Bara attends the box office, Mae West stands behind the concession counter, and Mickey Rooney is the usher. Visitors can open a sarcophagus located behind the theater to find a sculpture of James Dean lying in his tomb, cigarette still dangling from his mouth.

Tut’s Fever is a significant example of the work of multimedia artist Red Grooms, a pioneer of site-specific sculpture and immersive art, whose work is often inspired by popular culture, and movies in particular. Grooms often collaborates with other artists—including his wife, artist Lysiane Luong—and has likened himself to a director or producer on the creation of large installations such as this one. Visit Tut’s Fever Movie Palace in the Museum’s core exhibition, Behind the Screen. 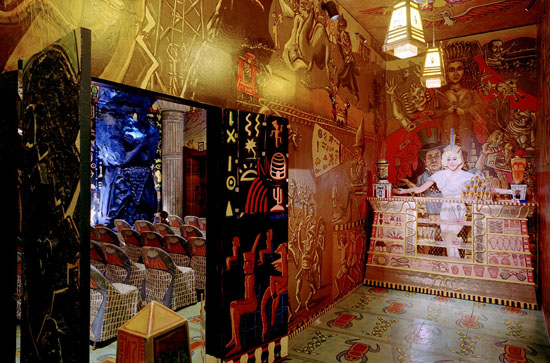