Resistance: the battle of philadelphia, courtesy of filmmaker

Journey of the Black Creative

In honor of Black History Month, our community partner The Afrikan Poetry Theatre’s annual film festival will highlight the rise of Black fiction and how Black history is preserved, reimagined, and remixed through the narrative form. This program celebrates the achievements of contemporary Black filmmakers, writers, and podcasters who work in the genre of speculative fiction—horror, historical fiction, fantasy, or science fiction. This day of free programming  includes a speculative short film program, a panel discussion on Black Speculative Fiction moderated by Tuffy Questell, and a feature film presentation of the star-studded Netflix revisionist western The Harder They Fall.

Each story in this shorts program takes us on a journey into futuristic and surreal worlds. The showcase includes a trailer for Barzack Towers, a sci-fi short created by students at The Afrikan Poetry Theatre; Jahmil Eady’s Heartland (2021), in which a woman attempts to immortalize her dying grandfather using virtual reality technology; Amirah Mohamed Tajdin’s Negotiating Liberation: Don’t Be a Dream, Please Be Real (2021), about the dreamy romance between a couple living in United Arab Emirates; Elisha Smith-Leverock’s Rejoice Resist (2020), which shows joyous acts of resiliency and two episodes of M. Asli Dukan’s web series Resistance: the battle of philadelphia (2020), about a clandestine collective of city residents who mobilize to resist pervasive surveillance and repressive state violence.

How do we reimagine the past and imagine ourselves in the future? Featuring pioneering creators of popular genres in film, television, and comic books, this panel discussion will look at how Black history is explored through speculative storytelling where the histories of Black revolutionary figures and infamous cowboys are transformed into thrilling epic tales such as in The Harder They Fall. Moderated by Tuffy Questell, the panel will feature Jahmil Eady, director of Heartland; David Crownson, writer of Harriet Tubman: Demon Slayer; Serena Rosario Stanley and Terence Stanley, extras casting directors on The Harder They Fall; and Zena Dixon, aka The Real Queen of Horror, writer and podcaster on Bloody Disgusting, who will all dive into contemporary stories and productions to make sense of the past, present, and future.

Dir. Jeymes Samuel. 2021, 137 mins. With Jonathan Majors, Idris Elba, Regina King, Zazie Beetz, LaKeith Stanfield. Infamous outlaw Nat Love (Majors) seeks to avenge the death of his parents in this stylish western directed by musician-director Jeymes Samuel. Love saddles up with his gang to take down his enemy Rufus Buck (Elba), a ruthless crime boss who just got sprung from prison. Starring a forceful ensemble who won the Gotham Independent Film Tribute Award, The Harder They Fall reinvents the stories of outlaws and cowboys in the 19th-century American West. The film speculates and creates a fictional, thrilling story with a high energy soundtrack featuring songs by Samuel, Kid Cudi, and Jay-Z.

Free admission with RSVP. Reserve a ticket by using this form. 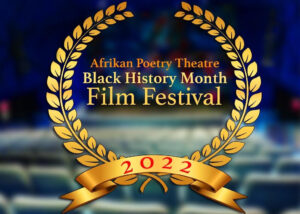