This February, MoMI highlights the work of Black actors and filmmakers in our galleries and theaters, anchored by a ten-film retrospective devoted to the pioneering athlete-turned-actor Woody Strode.

In the galleries, the ongoing exhibitions Icons: Framing Images of Black Women on Movie Posters and An Act of Seeing: Barry Jenkins’s The Gaze call attention to Black stars on screen and behind the camera. While in theaters, the Museum launches a major screening series devoted to the underappreciated Black and Native American actor Woody Strode on February 11; concludes a tribute to the late Sidney Poitier with a screening of Edge of the City on February 5; features a screening of Test Pattern with director Shatara Michelle Ford in person on February 19, as part of the Curators’ Choice series; and partners with the Queens–based Afrikan Poetry Theatre for their annual Black History Month Film Festival, a free afternoon program with screenings and discussion, notably a panel about Black Speculative Fiction, culminating in a screening of The Harder They Fall.

In addition, throughout the month, MoMI will offer the family-friendly Black History Month Scavenger Hunt, an activity inviting visitors to make connections between materials in the Museum’s core exhibition Behind the Screen and the history of voting rights in the United States.

Learn more about the following events listed below:

Tribute to Sidney Poitier: Edge of the City

A searing tragedy of racism and racketeering plays out against the New York City waterfront in this noir-tinged drama. John Cassavetes stars as a drifter who takes a job on the Manhattan dockyards and whose friendship with an African-American coworker, played by Sidney Poitier (receiving co-star billing for the first time), makes them both a target for a racist supervisor (Jack Warden). Sensitively helmed by socially progressive director Martin Ritt (Hud, Norma Rae), Edge of the City is a starkly realistic, pathbreaking depiction of interracial friendship and union corruption.

The Legend of Woody Strode

Woody Strode, the six-foot-four pioneering athlete turned movie star, was born in 1914, in South Central Los Angeles, to Black and Native American parents. A decorated football player at UCLA before joining teammate Kenny Washington in breaking the NFL’s color barrier in 1947, Strode eventually drew the attention of Hollywood. Initially cast on TV shows and movies playing shirtless Black stereotypes in action scenes, Strode graduated to speaking parts on Tarzan movies before landing key roles and stealing scenes in such films as Stanley Kubrick’s Spartacus and John Ford’s Sergeant Rutledge. After working with Ford on three subsequent films and with Richard Brooks in the Oscar-nominated The Professionals, Strode finally rose to stardom in Italy in the late ’60s through the early ’70s, contracted to work on such films as Sergio’s Leone’s Once Upon a Time in the West and Valerio Zurlini’s Black Jesus—his first top billing. Despite the lack of opportunities for actors of color, Strode left a legacy, one worth revisiting for the singularity of his onscreen presence. Whether he stands at the center of the screen or off to the side, whether he’s foregrounded or placed in the back of the frame, we always pay close attention to Woody Strode.

Debut writer-director Shatara Michelle Ford has crafted a gripping narrative centered on the perspective of Renesha (the remarkable Brittany S. Hall), a successful Black woman who works at a nonprofit and lives with her white artist boyfriend in Texas. Using a hazy, muted color palette to capture Renesha’s emotions and experiences, Ford dives deep into the dynamics of sex and power in contemporary society, revealing how effortlessly a man can violate a woman’s body. Test Pattern is a meticulously visualized and powerfully conceived exploration of the effects of systemic, patriarchal injustice. Winner of Lionsgate/STARZ Producer Award at the 2019 BlackStar Film Festival. A Kino Lorber release. 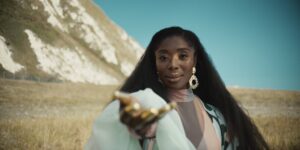 In honor of Black History Month, our community partner The Afrikan Poetry Theatre’s annual film festival will highlight the rise of Black fiction and how Black history is preserved, reimagined, and remixed through the narrative form. This program celebrates the achievements of contemporary Black filmmakers, writers, and podcasters who work in the genre of speculative fiction—horror, historical fiction, fantasy, or science fiction. This day of free programming includes a speculative short film program, a panel discussion on Black Speculative Fiction moderated by Tuffy Questell, and a feature film presentation of the star-studded Netflix revisionist western The Harder They Fall. 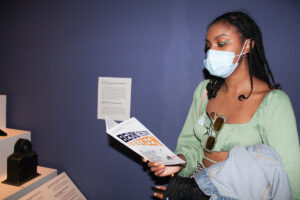 Black History Month Scavenger Hunt
As a fun gallery activity in our Behind the Screen exhibition, the Education department’s scavenger hunt, connecting voting rights, Black American history and the moving image, will be available to play for the entire month of February. Through drawing, trivia, and social media activities, participants will learn about famous actress Lena Horne and civil rights activist Martin Luther King, Jr. The scavenger hunt will be at the front admissions desk for kids of all ages to pick up and enjoy!

In addition to these events, explore our website for recorded conversations with Charles Burnett, Mario and Melvin Van Peebles, Halle Berry, George Clinton, Nekisa Cooper, Ava DuVernay and Bradford Young, and other filmmakers.