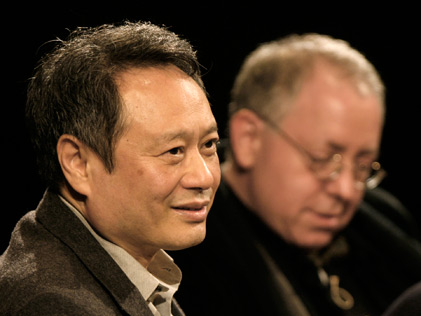 Academy Award-winning director Ang Lee and his longtime collaborator James Schamus have over the course of fifteen years made films including the current Lust, Caution (2007); Brokeback Mountain (2005); Crouching Tiger, Hidden Dragon (2000); Ride with the Devil (1999); The Ice Storm (1997); Sense and Sensibility (1995); Eat Drink Man Woman (1994); and The Wedding Banquet (1993). This evening at the Times Center included clips from their movies, a conversation, and an introduction by three-time Oscar nominee Joan Allen (The Contender (2000), The Crucible (1996), Nixon (1995)) who appeared in Lee’s The Ice Storm.