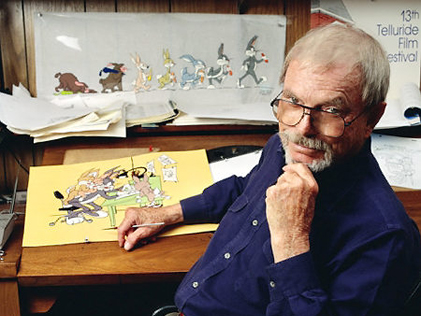 Working at Warner Bros. from 1938 through 1962, legendary animator Chuck Jones perfected the wisecracking Bugs Bunny, the short-tempered Daffy Duck, and the amorous Pepé Le Pew. The purest expression of his artistry is his Road Runner series, in which Wile E. Coyote endlessly pursues the elusive Road Runner. With its streamlined visual style, brilliantly geometric gags, and constant comic invention, the series is a masterpiece of American screen comedy. During the retrospective Chuck Amuck, Jones spoke at length about his life and art. In the tradition of his hero, Mark Twain, Jones was a witty, wry, thoroughly engaging speaker.