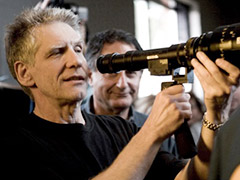 David Cronenberg made a stunning return to genre filmmaking with his 2005 film A History of Violence, a multilayered, deeply ambiguous, and darkly comic film about a family in a rural American town that is stunned by a shootout in the local diner. Evoking the best film noir of the 1950s, A History of Violence is as thematically rich and complex as Cronenberg’s finest work. It also features his best collaboration with actors, including Viggo Mortensen, Maria Bello, and Ed Harris. Cronenberg spoke at the Museum for the first U.S. showing of the film, just after its premiere at the Toronto Film Festival.