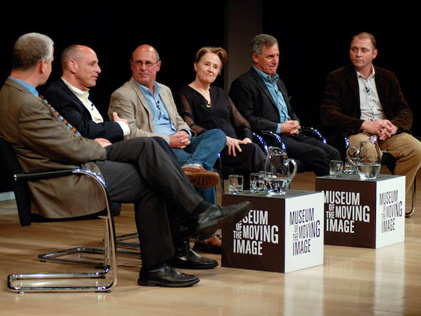 The documentary Food, Inc., which lifts the veil on America’s food industry, is a muckraking film that is elegantly made and entertaining. The Museum of the Moving Image presented the New York premiere, followed by a discussion with: Eric Schlosser, whose best-seller Fast Food Nation inspired the film; Robert Kenner, the director; Alice Waters, the renowned chef of Chez Panisse in Berkeley, California; Gary Hirshberg, the president of Stonyfield Farm, the world’s leading organic yogurt producer; and Marcel Van Ooyen, the executive director of the Council on the Environment of New York City, which runs nearly fifty greenmarkets.