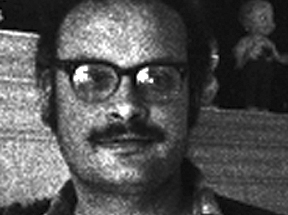 Belonging to a generation of underground filmmakers which included Jack Smith and Andy Warhol, George Kuchar brought underground films its truest expression of the pop sensibility. Kuchar (and his twin brother Mike) started making movies in the ’50s with an 8mm camera given to them by an aunt. The result, pictures like Lust for Esctasy and Pussy on a Hot Tin Roof, fall somewhere between parody and homage. The defining factor of Kuchar’s work (which has been solo since 1965) has been what might be called a camp sincerity. Nonprofessional actors (“people who were fat but wanted to be like Marilyn Monroe,” Kuchar has called them) cut loose with an abandon they would scarcely show in real life. The highlight of Kuchar’s work has long been thought to be 1965’s Hold Me While I’m Naked. After giving up 16mm moviemaking, Kuchar turned to the video diary, making autobriographical tapes which were edited in-camera. The relative cheapness of the form was liberating for Kuchar, allowing his B-movie sensibility free reign, and bringing out the central tension of his work: the tension between movies and real life.